Yesterday, I blogged about the illusory "final offer", noting that most cases settle.  The reason for that is that there is a realm of reason, a range if you will, where cases with similar facts and circumstances, should resolve themselves based upon experience, statutes, case law, Guidelines, etc.  In most cases, absent wide valuation disparities, esoteric issues, bona fide custody disputes, including relocation, and/or really unique sets of facts and circumstances, the range is a relatively small one.  These are not personal injury cases where a carrier is offering $0 and the plaintiff is seeking millions. 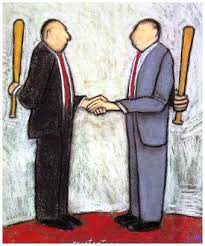 Maybe you don’t really want to do that.  Why?  Because, as noted in my last post, you will be going to an Early Settlement Panel (ESP), mediation, and/or an Intensive Settlement Conference (ISC).  The risk of negotiating with a reasonable position vs. the other side’s unreasonable position is that the impartial may suggest "splitting the difference."  Splitting the difference may be fair when both party’s proposals are within the reasonable range.  It clearly is not fair when one party’s proposal is outlandish.  Moreover, even if the unreasonable negotiator comes down substantially, perhaps even more than you come up (or vice versa), you will suffer the wrath of their righteous indignation because they "gave more."

Also, I previously posted about a mediator saying that he was creating "settlement anxiety" to try and move parties to get the case settled.  While this may be fair if parties are either equally reasonable or equally unreasonable, is it fair to try to push the reasonable one when the other party is unreasonable?  I think not.

In a case that I settled this year, the first proposal from the other side was clearly punitive and clearly bad faith.  We chose not to respond and I advised the adversary as such.  He begged us for a counter proposal.  We decided to make one that, while not bad faith, was extremely aggressive in the other direction.  What happened next?  We started negotiating within the realm of reason and the case got settled.

I am not saying that that strategy will work in every case but it worked in that one, as I suspected it might.  Negotiations can be complicated.  Great thought should be given as to the strategy to employ based upon who you are dealing with and how they are negotiating. In an advertisement in a recent  Super Lawyers publication, a firm stated that they were known for "winning" divorce cases.  That is funny since few are tried and seldom is there a clear "winner."  You don’t want to let the other side "win" a negotiation because they started with an absurd position and you felt compelled to negotiate on their terms.

Eric Solotoff is the editor of the New Jersey Family Legal Blog and the Co-Chair of the Family Law Practice Group of Fox Rothschild LLP. Certified by the Supreme Court of New Jersey as a Matrimonial Lawyer and a Fellow of the American Academy of Matrimonial Attorneys, Eric practices in Fox Rothschild’s Roseland, New Jersey office though he practices throughout New Jersey. You can reach Eric at (973)994-7501, or esolotoff@foxrothschild.com .